Health Ministry Director General Moshe Bar Siman-Tov on Sunday urged the Israel Medical Association to call off protests at public hospitals and clinics the following day, warning that this would harm patients.

In a letter sent to the association’s president, Zion Hagay, Bar Siman-Tov said he did not dispute the “need for expression of protest” over the recent violence directed at medical staff, but warned that “the planned steps will affect patients and their daily routine”. will harm.” , ,

“Like you, Health Ministry officials and I are following recent events with great concern and take any reports of violence in the health system with great seriousness. This incident seriously harms the system and its staff And it should be approached with a zero-tolerance policy,” he wrote in the letter, which was published by Channel 12 News.

Bar Siman-Tov said he would send a letter to all ministry employees summarizing some of the steps already taken to address the violence and that the ministry plans to end it completely in the near future.

He said he would visit the Soroka Medical Center in Beersheba on Tuesday – the site of a recent violent incident directed at medical staff – and invited Hagay to join him.

“It is clear that there is still much to be done,” he said, adding that he was “determined” to use all the means at his disposal to guarantee a safe healthcare system for patients and staff alike.

Zion Hagay (screenshot from YouTube; used in accordance with section 27A of the Copyright Law)

He urged Hage to reconsider the strike. Bar Siman-tov said, “Given our readiness to act on this issue, I would ask you to refrain from the said steps.”

He voiced support in the letter for the doctors and nurses who deal with patients’ violent outbursts on a daily basis.

“We are living through a complex and dangerous time where violence directed at medical staff has become a daily occurrence,” he said. “The management of the Ministry of Health stands with you in dealing with this unacceptable incident.”

The planned strike, announced on Thursday by the doctors’ union, comes after several recent violent incidents at Israeli hospitals.

Most recently, the police arrested a 17-year-old patient at a women’s health center in Ramle last week, who was suspected of assaulting a doctor with brass knuckles and kicking him on the head. Doctor needs treatment in the nearest hospital.

The day before, a two-hour stoppage was called at Soroka Medical Center after the parents of a 15-month-old boy who was being treated at the hospital physically assaulted a pediatrician.

Announcing the general strike, the Israel Medical Association said hospitals and clinics would operate all weekend on Monday, offering reduced services. The Association shall conduct a committee to decide on special individual matters. 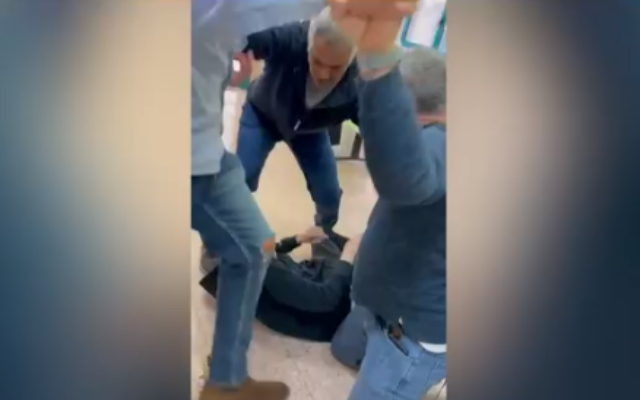 Screenshot taken from a video showing parents of a child attacking a doctor for refusing to expedite their son’s treatment at the Soroka Medical Center in Beersheba, January 16, 2023. (Twitter/Screenshot: Used in accordance with section 27A of the Copyright Act) )

Cases of violence against medical staff are not uncommon. Last June, the doctors’ association had announced a two-day strike to protest against violence against doctors and the state’s alleged failure to implement a plan to deal with such incidents.

Last May, the finance ministry approved a budget to deploy police officers in 28 hospitals across the country following rising violence against medical staff.

you are a devoted reader

we are really glad you read X Times of Israel article in the last month.

That’s why we started The Times of Israel ten years ago – to provide discerning readers like you with must-read coverage of Israel and the Jewish world.

So now we have a request. Unlike other news outlets, we have not installed a paywall. But as the journalism we do is expensive, we invite readers for whom The Times of Israel has become important to help by joining our work The Times of Israel Community.

Thanks,
David Horowitz, founding editor of The Times of Israel